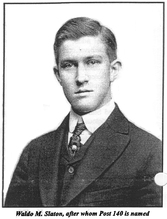 Lt. Waldo May Slaton was born on September 29, 1893 in Atlanta, Georgia. He was the son of William and Martha Grant-Jackson Slaton who resided at 147 Myrtle Street.

Waldo attended elementary and high school in Atlanta. After high school he entered the Georgia School of Technology (Georgia Tech today). While at Tech he was the president of Phi Delta Theta Fraternity, and, a member of the Pan-Hellenic Council. He was also a member of the Honorary Society of Koseme, and, because of his leadership and high scholastic standing, was elected as a member of the Phi Kappa Phi Honorary Fraternity. In his junior year he was awarded the Gold “T”, an annual award presented to the top 10 members of the class. Waldo graduated from Tech with First Honor in the class of 1914. He received a Bachelor of Science in Mechanical Engineering. Waldo was a member of the American Association of Engineers (Monad 2235).

In the fall of 1914 Waldo moved to Pittsburgh, Pennsylvania, where he was employed by the United States Steel Corporation. In early 1917 he accepted a new position with the Tennessee Coal and Iron Railroad Company, and moved to Birmingham, Alabama.

When war was declared in April 1917, Waldo volunteered for service, and was commissioned a 2nd November 1917 and assigned to Camp Lee, Virginia. Later he was reassigned to the U.S. Army Engineer Depot. There he became part of the Inspection of Engineer Materials Division, and was promoted to 1stan overseas assignment with a Pioneer Regiment, but was denied because of his value to the war effort here in the United States. Waldo’s next assignment was in Chicago, Illinois. There, in November 1918 he contracted Influenza (then the Spanish Flu) and passed away as a result. He died at Lakeside Hospital in Chicago on November 22,1918. He was buried November 25, 1918 in Oakland Cemetery in Atlanta.

Waldo’s father, William Martin Slaton was the Superintendent of the Atlanta Public Schools. His paternal grandfather William Franklin Slaton had also been the Superintendent of Atlanta Public Schools. His maternal grandfather, James Jackson was a prominent legislator, and later the Chief Justice of the Supreme Court. Waldo’s uncle, John M. Slaton, was the Governor of Georgia.

Waldo had three brothers , two served in the U.S. Army. William F. Slaton Jr. served in France as a Captain with the 23rd Lt in the Corps of Engineers. He was called to active duty in Lieutenant. Subsequently, he requested Infantry, 2nd Division. His other brother, John M. Slaton Jr. also served in France with a Heavy Artillery unit, and later became Deputy Administrator in the Veteran’s Administration’s Atlanta office. Another brother , James J. Slaton was an attorney. Waldo’s sister, Lamar Jackson-Slaton Hitt was married to Edward G. Hitt.

Waldo died in the influenza (Spanish flu) pandemic of 1918-1920. The flu virus was believed to have originated in a military staging area at Etaple, France, where the quartermaster was keeping a large number of pigs. It is believed that the flu virus was contracted from the pigs being kept there and transmitted to the U.S. by returning service members. Twenty-eight percent of the U.S. population was infected, killing over 600,000 people.

December 11, 2014
The preceding information was compiled by Dave Tippel, Post 140 Historian, from internet Google searches, and a biographical sketch from a Post history, completed in 1946, by Mary W. Vinson, Historian, Post 140 Auxiliary. 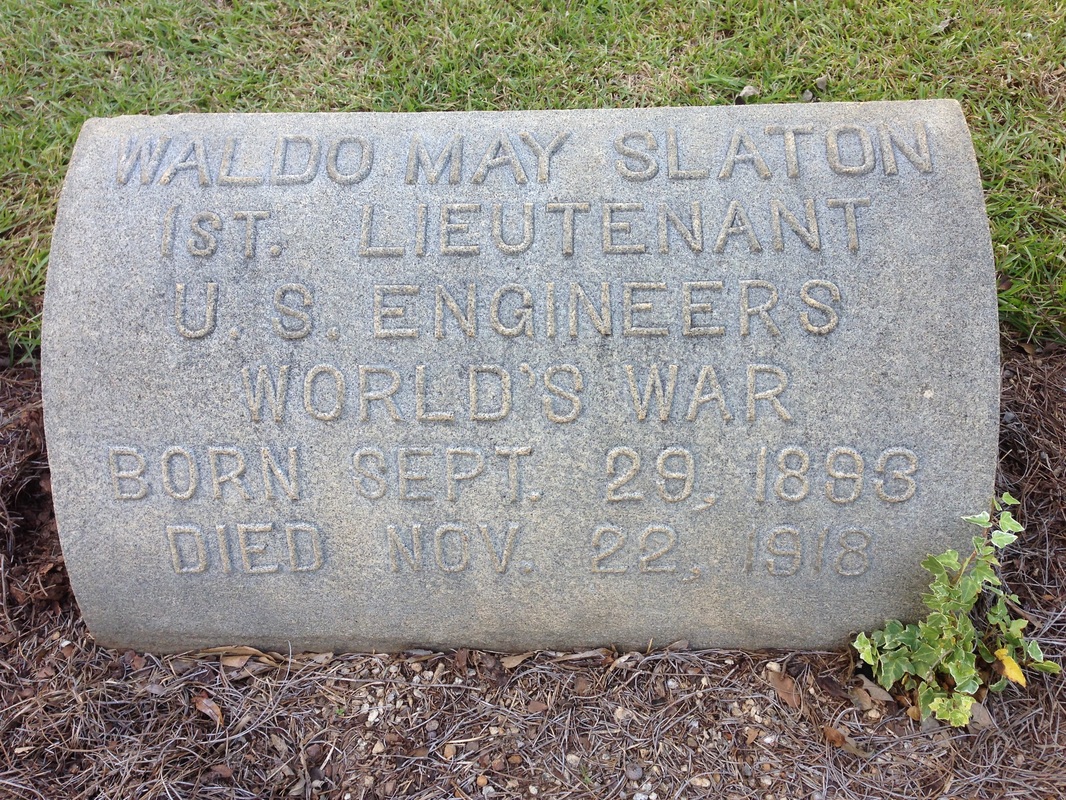