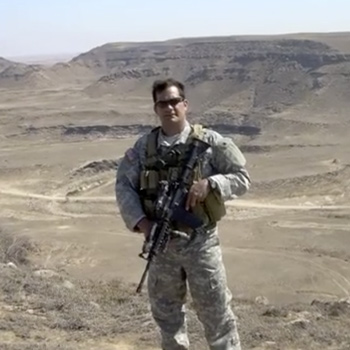 As a child, Ryan always knew that he wanted to be a soldier. However, his career would lead him to the corporate world. Ryan’s professional days began in Atlanta working in telecommunications for BellSouth and later for Williams Communications in New York City. On the morning of September 11, 2001, all of that changed. When two airliners crashed into the twin towers, it set in motion Ryan’s incredible journey from protecting his childhood neighborhood of Brookhaven to the neighborhoods of Iraq.

This journey began with Ryan’s close friendship with Adam White. Ryan and Adam were best friends since the first grade. They were fraternity brothers, roommates, drinking buddies, and climbing partners while students at Boulder. Their shared thirst for adventure was forged while bivouacking in a snowstorm near the summit of Mt. Ranier.

Adam and Ryan continued to climb together even after they both moved to New York City. On the day of the September 11th attacks, Ryan became greatly concerned when he could not contact Adam, as Adam worked in the North Trade Tower. Ryan rode his bike around the city for weeks posting flyers with Adam’s picture and searching the city’s hospitals. Ryan never found Adam and he was profoundly affected by his best friend’s death. He simply had to do something.

Ryan’s friends and family were shocked but not surprised when at the age of 31 he enlisted in the Army. Many remember Ryan as child wearing fatigues everyday. For his 7th birthday his mother planned an army birthday party at a military themed restaurant. When Ryan was eight, two Marine Corps recruitment officers knocked on his parent’s front door because Ryan filled out and mailed in a recruitment postcard that he tore from a Boys Life magazine. Ryan hit the jackpot when an Army-Navy Surplus store opened in the neighborhood. To his parents great concern, he brought home various army helmets, pocket-knives, gas masks, nun-chucks, smoke grenades, and camo face paint. Brookhaven was kept very safe by their beloved nine year-old neighborhood commando.

Ryan did not take this decision to enlist lightly. Deep in Ryan’s heart was a love for his country and a great historical perspective of the sacrifices that young men and women have made to defend America’s peace and security. One night at the Buckhead Lions Club, Ryan listened intently to a speech about the global war on terror given by Major General Julian Burns. After the speech, Ryan introduced himself and informed General Burns of his decision to join the fight. General Burns was so fired up about Ryan’s commitment that he and Ryan both got down on the floor and pumped out fifty push-ups together.

After basic training and Airborne school at Fort Benning, Ryan was selected to tryout for Special Forces at Fort Bragg. At 32, Ryan was one of the oldest candidates in his class. The training was physically and mentally grueling. He emerged from the program successfully and graduated to become a member of one of the most elite fighting forces in the world.

In May 2009, during a deployment in Iraq, Ryan noticed that he was jaundiced and was airlifted to Baghdad for further testing. Ryan was diagnosed with Cholagiocarcinoma and immediately medivaced to Walter Read Army Hospital in Washington DC for initial treatment, and later to Memorial Sloan-Kettering Cancer Center in New York City for surgery. He was met in New York by his immediate family and his wife Heather who was nine months pregnant with their second child.

Ryan, Heather, 18 month-old Elizabeth and newborn “Sophie” spent the following days convalescing. Ryan would show his wife and daughters his old New York City haunts and tell stories about his old friend Adam. And everyday after their long easy strolls through Central Park, Ryan would bring his children home for bath-time.

On the morning of July 7th, the sun rose in New York City as Ryan passed on to heaven. His wife Heather and his parents Mary Jo and Al held him closely.

Ryan was not in pain as his once strong body relinquished its long and courageous struggle to stay with us. For six days Ryan fought with the strength and honor of a Special Forces soldier, but the complications from surgery to remove the cancerous tumor in his bile duct were far to great.

Ryan ended all of his letters with a simple thought: “Keep on rockin’ in the free world.”